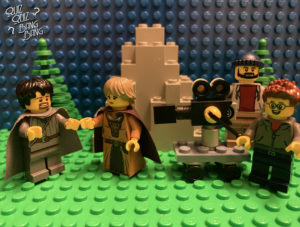 We are beyond thrilled to have Jesse Zwick (producer/writer of Nashville and writer of Parenthood) and Jed Rapp Goldstein (writer of Ozark) who take on Moon and Valerie Myerson.

The 1978 World Cup is considered by some as the dirtiest world cup with tales of match fixing and murder. What host country that was ruled by a civic-military dictatorship won the 1978 World Cup?

The Chicago Water Tower is one of the buildings to survive the Chicago fire and is the home to which theater who’s first performance involved Alice in Wonderland?

80% of the United States’ active Volcanos are located in which state?

In the musical Assassins, there are both attempted assassins and assassins based off historical figures. Name two out of the four assassins. You get two extra points for each extra right answer.

How many pounds of cow milk does it take to make one pound of cheese?

A Friend in Need is perhaps the best-known work in a collection of oil paintings by Cassius Marcellus Coolidge, and depicts anthropomorphized animals doing what?