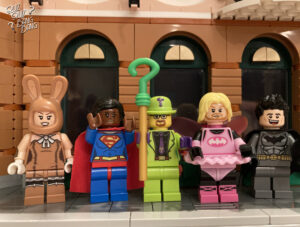 It’s a Bird….It’s a Train….It’s Superman Trivia. I am vengeance….I am the night…..I am Batman Trivia!!! In this very fun Bing Bang Bonus we have team Superman, which is author of Women of Color in Tech Susanne Tedrick and Annie Flora, going up against team Batman, which is board game blogger Bert and his friend Adam.

What are the names of Superman’s adoptive parents?

Though illness prevented it, which actor was asked to play the role of the Penguin’s father in 1992’s Batman Returns?

Mark Hamill was cast as the Joker in Batman: The animated Series, but he actually replaced which actor who had initially been cast and recorded 4 episodes before being let go?

Widely regarded as one of the worst video games ever made, Superman: The New Adventures was made for which specific game console?

Veteran actor Lane Smith portrayed which character in Lois and Clark: the New Adventures of Superman?

The Mego Corporation was the first to license action figures of Batman. Which company took over the license when Mego went defunct in 1984?

The Bat-man first appeared in Detective Comics #27 in 1939. Which other well-known character from the Batman canon also makes a first appearance in the issue?

Antje Traue portrayed General Zod’s Lt. Faora in 2013’s Man of Steel after which actress turned down the role?

Though one could argue Joe Chill, the man who shot Bruce Wayne’s parents, was the first villain he faced in the comics (at least in a flashback), who was the first to appear and go on to become a supervillain?

Name either of the 2 actors to appear in all 10 seasons of Smallville.

Which film in the Batman franchise was the first comic book movie to surpass $1 billion at the worldwide box office?

Who was the very first villain to appear in Superman comics?

If you like this episode, check out our group episode featuring Sarah and her husband Patrick.

Don’t forget to follow us on social media for more True Crime Trivia: