Ep 168: Summer Blockbusters Trivia with Fighting in the War Room 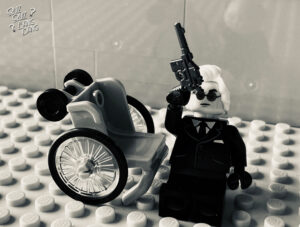 Gentlemen, you can’t fight in here! This is the War Room!

It is with extreme pleasure that we announce that Fighting in the War Room will be joining us for a special film trivia episode. Matt Patches is the Senior Entertainment Editor at Polygon, Katey Rich is the deputy editor of VanityFair.com and together they form team Operation Kino. Dave “Da7e” Gonzales will have a book about Marvel coming out in 2022, David Ehrlich is a senior film critic at Indiewire and together they from team We’re Thinking of Ending Katey and Patches. The amount these guys know about film trivia is only matched by their wit and banter. Enjoy this episode and then run (or click) over to Fighting in the War Room and give them a listen, a follow, and all that good stuff! Twitter: follow the show (@FITWR), Katey (@kateyrich), Da7e (@da7e)  Patches (@misterpatches), and  David (@davidehrlich) .

The same fictional high school served as a featured location in Sixteen Candles, Weird Science, The Breakfast Club, and what other comedy? And for 2 extra pts, what was the name of the HS?

The 6th highest-grossing film of 1981, what movie and its sequel were the final film appearances of Dean Martin? And for two extra points, which famous actor had his second Hollywood role in this movie?

If you take the first letters of the main characters’ names, Dom, Robert, Eames, Arthur, Mal and Saito – they spell “Dreams” which is fitting for what movie?

Sean Connery was 61 years old when he played what role, a character who was supposed to be 37 at the time of the movie’s setting?

Fired for allegedly not knowing the difference between a whale and a shark, who was the first director hired for Jaws?

In what Oscar-winning romance does one member of the 2 lead characters say “Ditto” when the other says I love you?

Alluding to director Christopher Nolan’s son, what was the film’s false title given during production of The Dark Knight in order to thwart would-be onlookers?

Mad Max Fury Road, is the first Mad Max movie that credits the character with his full name, what is his full name?

What was the first film to gross 100 million in its opening weekend alone? For 5 points we will give you a hint. 2002

How many dinosaurs in jurassic park are actually from the Jurassic period?

What is the only sequel in the 20th Century to win an Academy Award when the previous installment received no nominations?

Don’t forget the UNICEF Fundraiser on May 21st at 8pm EST and to donate at https://www.justgiving.com/fundraising/uniceftrivia