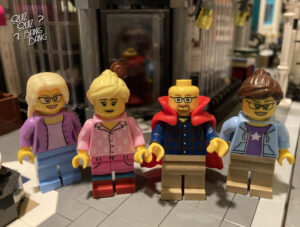 We are so excited to have such incredible talented guests on this episode. Kat Gotsick and Annie Flora are team Kannie as they go up against David. How would you hold up against them with questions like:

What architect designed Falling Waters, a house perched on a waterfall, in Mill Run Pennsylvania?

The aubergine, a plant in the nightshade family, is commonly known as what in the US?

Mary Shields was the first woman to finish what famous Alaskan race in 1974?

What is the aesthetic or imagery inspired by an old-fashioned, rural lifestyle, characterized by rustic décor and fashion, sometimes including a revival of traditional handicrafts?

In 1999, Lenny Kravitz scored a hit with his cover version of the classic rock song, “American Woman”. What Canadian band originally recorded this song in 1969?

Partially funded by the U.S. government, Washington D.C. is home to the world’s largest research and museum complex. What is this educational foundation?

What 1992 comedy film, based on an SNL skit series, brought us the annoying catchphrase ‘a sphincter says what?’

Kentucky was admitted into the Union as the 15th state on June 1, 1792, splitting from what other U.S. state in the process?

Originally associated with the traditional battle preparations of Maori warriors, what is the ceremonial dance often performed by the All Blacks Rugby Team before a match?

Flatbreads such as naan and roti, are cooked in what Indian oven?

Astraphobia is the fear of what?

Who released the song “Footloose” in 1984, the lead single from the hit film of the same name?

What 1996 comedy was the movie remake of La Cage aux Folles?

If you liked this episode, listen to the first match between Millenium vs Willenium episode.